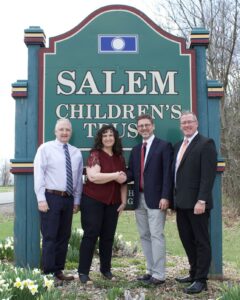 In the early days of the COVID-19 pandemic last spring, Grafton’s Chief Operating Officer, Kent Houchins, became aware of a Maryland nonprofit that was closing its doors due to financial hardship. Salem Children’s Trust had served more than 2,000 abused and neglected children since opening in 1979, providing a home, education, and therapy on a 270-acre refuge in the Appalachian Mountains.

“It’s a really special place,” says Kent, who decided to visit Salem Children’s Trust with Chief Strategy Officer Scott Zeiter. The pair wanted to explore what role, if any, Grafton could play in the organization’s future.

Located about 20 miles west of Cumberland, the sprawling campus is home to a school building with five classrooms, four residential houses, a baseball field, fitness center, gymnasium, greenhouse, stables, and miles of trails where students could hike and ride horses as part of their equine therapy. “Salem was built to be a haven for children who were struggling,” says Scott, “but it was clear they were seeking assistance to revive services on the site.”

After more than four decades in operation, the closure meant 20 youths would need to be rehomed and about 50 employees would lose their jobs. “It was an extremely difficult time,” remembers Connie Meyers, Executive Director of Salem Children’s Trust. “We had a few other agencies that came to tour the campus, but a partnership just wasn’t sustainable for them. We didn’t know what the future held.”

Scott and Kent got to work exploring options for a collaboration. While it was too late to retain Salem’s clients and staff, market research revealed a high need for Grafton’s services in the State of Maryland. After discussing options with the Board of Directors at both organizations, leadership moved forward with a plan to reopen Salem Children’s Trust using Grafton’s programming and model of care. Instead of serving the population it had before, the nonprofit would welcome children with Autism, intellectual disabilities, and complex mental health challenges.

With the new management agreement finalized earlier this year, Salem and Grafton have been hard at work preparing for a reopening on September 7th. Two of the campus residences are being renovated to house an initial cohort of eight to 16 children, and plans are underway to build additional homes tailored to clients with special needs. Salem’s four horses—which have been boarded during the closure—will soon be brought back to campus, so the new students can benefit from equine therapy. A local hiring search is also in progress, with hopes of building a 15- to 20-person staff of direct care professionals, teachers, therapists, and other clinicians for the upcoming academic year.

“It may take a while, but I’m optimistic that we will reach full residential capacity and have the same number—if not more—staff than we had before,” says Connie. With full enrollment, Salem will be able to serve up to 50 day students and more than 30 residential clients. “I can’t say enough about how supportive every department at Grafton has been. This whole plan could not have been done without the support of their personnel.”

For those who want to learn more about Salem Children’s Trust or explore possible job opportunities, the campus will be hosting an open house on July 30th. Tours and complimentary food will be provided, and discounted educational materials will be available for purchase. Email communications@grafton.org for more details.