Autism Awareness Month: Going for the Brass Ring and Getting the Golden Horseshoe

It’s not unusual for a parent to be beaming with pride when their child wins an award. So it may not surprise you that I am incredibly proud of my son, Brendan, who is, on May 4, traveling to Charleston, WV as a recipient of the Golden Horseshoe award, which honors students who excel in the study of the state. 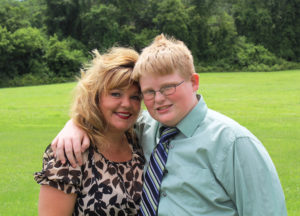 Brendan was diagnosed with autism shortly before the age of three. He spent a few weeks receiving West Virginia Birth-to-Three services before entering special needs pre-kindergarten in Jefferson County. He was picked up every morning in the handicapped bus and spent his school day in a self-contained classroom, engaging in activities like spinning, toe walking, reciting movies, flapping, head banging, aggression – all of the stereotypical behaviors that comprise autism. His outlook was grim. As his mother, I pledged to give him every tool available and to work hard to make sure he was able to live his best life. I realized, though, that his best life would likely look much different from what most mothers imagine for their children.

I believe intensive early intervention was critical for Brendan. And by that I don’t mean outside services, because there weren’t any available back then. In fact all services related to autism were specifically excluded from insurance policies because it was considered educational and not medical or rehabilitative.

After his nine weeks of birth-to-three services, we were on our own. As a single mom, I didn’t have the funds to hire anyone privately. So, I read and learned and became his therapist. It was hard. Every weekend, I had other children over to play. But these weren’t the usual play dates that neurotypical children might have. I stayed with them during their time together and taught him how to take turns, how to ask questions and how to respond to questions and how to do what other kids wanted to do. I made visual schedules, social stories, first/then books, etc. I learned how to introduce him to new environments after preparing him extensively. We survived the lack of sleep and the meltdowns and the aversions and we just kept going.

Thankfully, things have changed since then. Early intervention programs are more widely available and their value has been proven. For any parent of a child with autism, I strongly encourage you to seek out these services and advocate aggressively for funding. Getting ahead of the issues early — through diagnosis, services, IEPs and major parental involvement —makes a difference.

As Brendan began attending school, he had many wonderful teachers to whom I am so grateful. Between the work they did with him in the classroom and the work I did with him at home, he progressed. But Brendan did the hardest work of all as he struggled to make sense of a world that was full of confusion and uncertainty.

Although he had an aide in kindergarten, Brendan was mainstreamed beginning in first grade. He received pull-out services and his team of teachers, therapists and administrators worked hard with him. Individualized Education Plan (IEP) meetings were true collaborations as we worked to figure out how to help Brendan reach his maximum potential.

The years weren’t easy. Like many individuals with autism, Brendan experienced periods of growth followed by periods of regression. He struggled with friendships. He hurt people. He hurt himself. At the age of seven, he spelled a word wrong in class and proceeded to split his head open with a toy out of frustration. As a result, he was placed in residential treatment due to self-harm. But he persevered and so did all of the teachers and staff who worked with him.

And slowly his life changed.

Brendan is now almost completely a General Education student at Harpers Ferry Middle School. He has an amazing group of friends. He is kind. He is articulate. He no longer displays aggression or self-injurious behaviors. He has learned how to interact socially with both peers and adults. His is respectful and a good student. He has plans for college and a life like anyone else’s. These are all things that we scarcely dared to dream might be possible for Brendan.

It’s no coincidence that as a mother of a child with autism, I now work at an organization like Grafton. Working here has enabled me to be in a position to both give and receive. I’ve learned so much from my experience here and have been given the gift of working with people who understand not only the challenges that my child faces, but also those that I face as a parent of a child with autism.

When Brendan was in fourth grade, he had the lead role in a school play. Kim Sanders, President of Ukeru, brought her entire family to see him shine. The love and concern I have received from this organization makes me a loyal fan for life.

But, my experience here has also allowed me to give back: to share insights that help caregivers; to positively impact the lives of our clients; to train new hires in the autism experience; to support parents as they work with Grafton staff.  It’s been an incredible journey both as a mother and as an employee.

The Grafton approach supports my belief that trauma-informed care is critical for a child with autism. Every aspect of life is traumatic for someone with autism because they can’t predict what will happen next, because lights and sounds and touch and crowds are painful, because they don’t understand social situations. Their brain is in constant fight or flight response – the very definition of trauma. Being able to mitigate those issues and decrease the traumatic impact is so important. I know, as a parent, that we have to do this, too. We can’t expect teachers and therapists to do all of the work – it’s a collaborative effort. 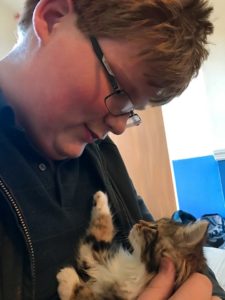 Brendan Zampino with a feline friend

Today, Brendan is one of the winners of the Golden Horseshoe award. I wish I could put into words what a tremendous accomplishment this is, for him, for West Virginia Public Schools and for everyone on Brendan’s team. So many dedicated educators and care providers were instrumental in helping him get here.

May 4th is going to be an incredibly special day for me and for Brendan. So yes, I am a very proud mom. And I have faith that, with the right mix of individualized, trauma-informed services, any parent of a child with autism can experience this same pride for themselves.