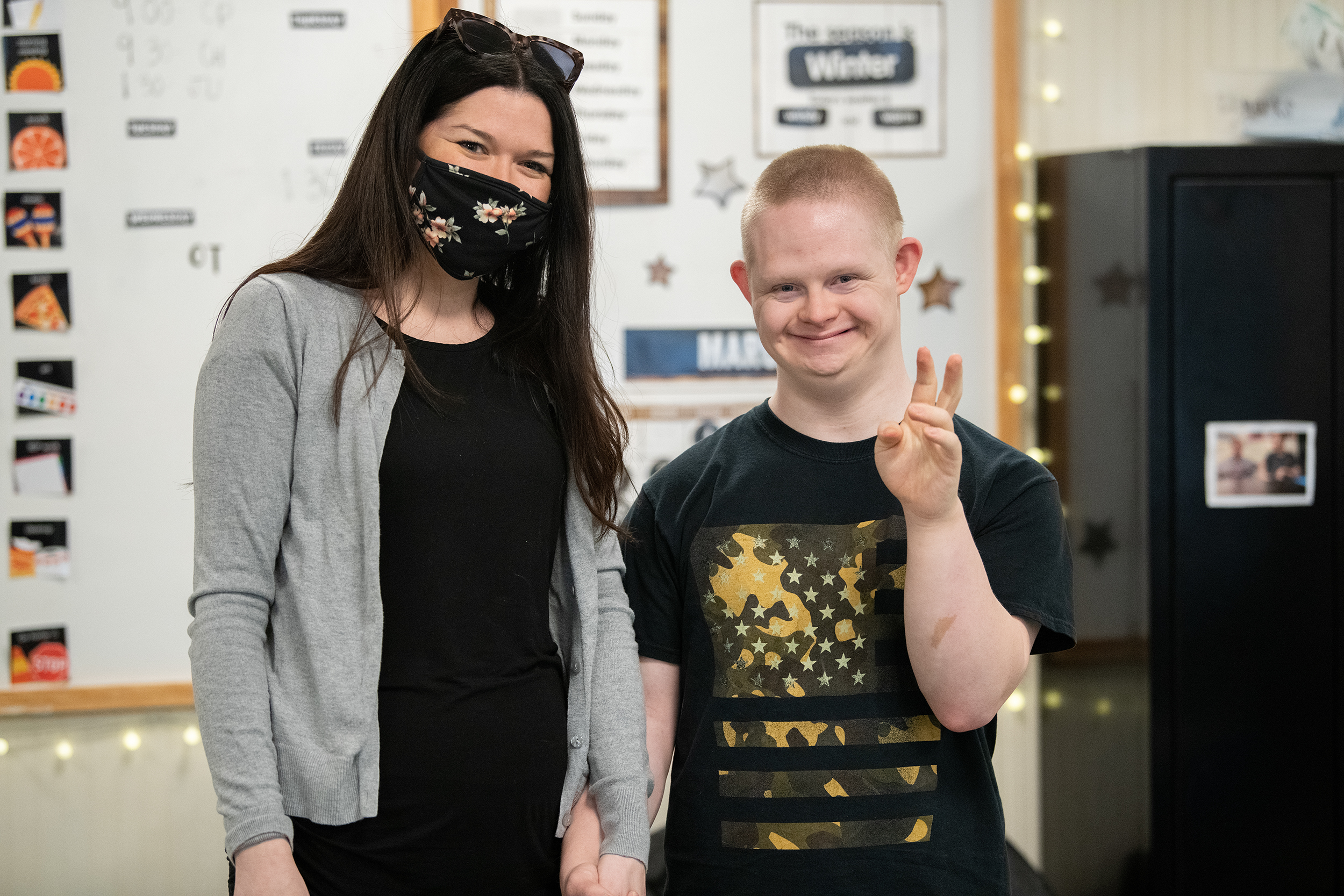 Giving Tuesday is a global day of philanthropy held each year right after Thanksgiving. To celebrate this year, our team is sharing some of our favorite client stories. Anecdotes like these not only make us proud of our staff, but they are a testament to Grafton’s positive influence in so many people’s lives!

If these stories inspire you to support our mission, please consider donating here. Your tax-deductible contribution will go directly towards funding our programs and staff incentives for our amazing team.

“One of the proudest moments in my career happened when I was doing ABA outreach at Grafton, working with clients in their homes. We got a referral for a 3-year-old boy with autism. He had no communication, play, or social skills. When we went to observe him, he sat in the corner and threw toys from one end of the room to the other. When he needed something, he would pull on his family members’ clothes or just scream and cry.

After working 15 hours a week with him for about a year, the progress was amazing. He was able to say his grandma’s name, his aunt’s name, and his mom’s name. He was able to ask for certain treats and foods. And he had appropriate play skills and social skills. I’ll never forget seeing the tears of joy in his family members’ eyes when I would point and say, “Who is this?”—and he could say their names.

The boy is 7 or 8 now, and his family has continued to keep in touch with me. He’s in regular public school, and he talks up a storm. He’s a happy, social butterfly. He goes to lunch and recess with all of his classmates, and he’s thriving. I’m so proud of him. That’s why I continue to do what I do. Teaching that little boy those skills and helping him along his way—that’s why we’re here.”

“A couple of months ago, I said goodbye to a client who had been on this campus for 3.5 years. In the first month I worked with him, he had 337 aberrant behaviors in my sessions. Once we got to work on his treatment, we established routines. I learned the things he liked and found that he would work hard to earn them. In the reporting period just before he left, he only had 16 aberrant behaviors. It was so fulfilling to see him succeeding in his treatment, and I was so grateful to have worked with that kid.”

“Some of my favorite stories to tell are from our weekly visits to the local animal shelter. Recently, I was working with an adolescent boy who is hyper-active and has a history of poor impulse control and aggressive behaviors. When he connected with a particular animal at the shelter, you could see his entire body language shift. He was not only calm, but also physically peaceful. He spoke in low tones, became tearful, and displayed empathy towards the needs of that animal. He told me what he thought that animal was experiencing and wondered aloud what it may need. It was clear that his emotion was coming from his own experiences and what he has endured. It was powerful. For me, moments like that provide insight and help me meet clients where they’re at.”

“Fredrica (the head of Grafton’s music therapy program) and I co-treat a client who is working on his coping strategies. We were in a session one day, about two months into my internship, and the student began to take the lead. As the therapist, I was used to controlling the session structure, but this day was different. He would say, “Okay Miss Freddy, it’s time for you to sing. Okay Miss Jayda, it’s time for you to sing.” Suddenly, the three of us were making music together, like friends. I had never felt that before. We were all singing, all playing our instruments. It was the first time I was able to let the music speak instead of letting words speak. It was so relieving. I felt like I just went through my own music therapy session. I realized that sometimes it’s okay to let go and be one with the music and the client.”

“A 15-year-old client I’m currently working with has a pretty strong case of autism and possibly some thought disorder. During his admission, several team members had to assist in the session so that his family could leave safely. He arrived so filled with bitterness, anger, and disgust for other people—much of it stemming from events in his past.

This boy is discharging next week, and he has made amazing progress. He has become aware of his resentment towards others and is starting to let go of it. It’s just been a magical process to be a part of. He now realizes that he has a pretty good life. Despite the severity of his diagnosis, he has demonstrated the insight and the willingness to let go of things that were holding him back.”

“One day my coworker was teaching, and one of my former students was in her online class. I hadn’t seen him months, and I happened to walk by in the background, and he saw me on the screen. When he recognized me, he just stopped and started screaming my name. That was pretty cool. Then I came over and got to catch up with him and his mom. It’s a special feeling when a student is so excited to see you.”

“I had a client who hadn’t seen his mother in person for a while, and she came to watch one of our shows. He walked in and went up on stage to sing his solo. When he got to the mic, he spotted his mom in the audience and said, “Oh! Hi, Mommy!” He was just waving and smiling. It was an amazing moment, because he got to sing a solo for his entire family, and they were laughing and interacting and filming him. It was really cool.”

“We had a kid who came to us with a significant trauma history and severe aggression. Working with him, the team, and his parents, we significantly decreased his aggression to a couple of times a month versus a couple of times a day. It’s been really rewarding to see the team work together to help him acquire skills and be able to function and deal with things without being aggressive. As staff, we’re here to help clients and their families. In this case, I probably learned just as much – maybe more! – from them as they learned from me. Each client teaches me something new.”

“I was an elementary and middle school teacher when I first started at Grafton, so I got to work directly with the students on a daily basis and see their growth. Some of the students I had when I first started are now in the high school classrooms, and it’s very cool to see how much they’ve grown, not only physically but also in terms of their independence, their skills, and their ability to venture into the community on a weekly basis. Seeing those changes over time with students is my overall favorite story.”

“We had one resident who made a lot of progress. He came in after suffering physical and verbal abuse from his mother, and he had a really rough time in the beginning. While he was here, he received individual therapy and music therapy. Gradually, his behaviors started to change, and by the time he left he was a totally different person. He was ultimately able to return home and be with his family again. It makes you happy to see that people can actually follow through with the work that you’re doing.”

“I remember there was one resident who would always squeal and jump up and dance when I would enter the home to begin my shift. That greeting gave me such a warm and fuzzy feeling of appreciation. The staff later told me that, after I left, he would lie on the couch where I sat because he said he could still smell me. I thought that was just so special.”

“One of my favorite stories is from 25 years ago. We had a teenage boy placed at Berryville. He was definitely not on a good path in life. He had committed numerous small infractions before being placed at Grafton out of detention. He struggled with us for a while before we discovered his passion for art. I gave him the opportunity to use his passion and skills, and he excelled. He eventually painted the interiors of our (former) quiet rooms at Berryville. His work was absolutely beautiful. Along the way this young man became a model client and grew to appreciate the care/treatment that he was receiving. This was true to such an extent that he actually cried when he finished the program and it was time for him to leave. I like to think that we changed the path he was following and showed him that life had great opportunities for him.”