Much More Than a Science Lesson

A science fair is a rite of passage for many elementary school students. The baking- soda volcanoes and Styrofoam models of the universe can even elicit eye rolls from many kids. But not Kayla Meehan’s classroom of 4th, 5th and 6th graders; for these students, a science fair was a very unique and special experience that they may well remember for a long time to come.

As a teacher new to her classroom on Grafton’s Berryville campus, Kayla wanted to make sure that science instruction could also serve as a fun activity. So, she and her Instructional Assistant , Sarah Weaver, combined learning about planets and dinosaurs with arts and crafts as well as a bit of entertainment.

To begin with, they had students team up in groups of two to create paper mache models of the planets, using flour and water instead of glue for safety reasons. With a history of negative peer interactions, working as partners was new for these students. They learned to take turns and assign specific roles and responsibilities to accomplish their tasks.

Some of the fantastic paper mache planets made by Kayla Meehan’s Berryville students.

They also conducted online research to determine, for example, the color of the planets. Many had never worked on a computer, let alone turned one on or accessed sites like Google and Wikipedia. They learned to type in passcodes and what alt-control-delete means – things that many elementary school students take for granted but which presented a unique skill building opportunity for this class.

“Helping a child log on to a computer and conduct a search is so critical to our society,” explained Kayla. “Lessons like this help to set them up for success after Grafton.”

Wanting their final presentations to be fun, Kayla and Sarah invited Berryville’s administrative team to attend. Upon receiving an invitation, Berryville’s principal asked if it could go out more broadly to the entire leadership team. Every invitee immediately accepted.

Taking their hosting duties very seriously, the students planned to serve refreshments and carefully prepared the classroom for their guests. Each had a specific task – some set up chairs, some served refreshments, and others were ushers. They dressed the part as well, donning dresses and collared shirts.

One by one, each student presented their paper mache planets. They were proud to be sharing their projects with a group of grown ups. 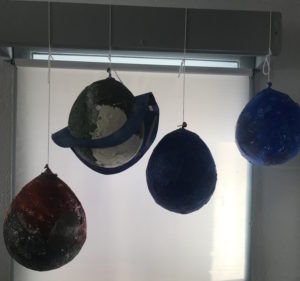 More of the great planets created by Kayla Meehan’s students.

“They were so excited for their five minutes of fame,” said Kayla with a smile. “One student even asked if the adults wanted his autograph.”

With this success under their belt, the class moved on to a lesson on dinosaurs. This time, they worked independently; reserving student laptops to conduct their research before creating tri-fold boards that became an exhibit for their “audience.”

“No one argued about who would present first. They worked together very well,” said Kayla. “They were so excited to be able to host the Berryville leadership team.”

Asked why she thinks it was important to have the leadership team attend these presentations, Kayla had this to say:

“It’s a great thing that the administrative and leadership staff — people who don’t work day in and out with the kids — let these students know that they matter. They are getting recognition for their work. They are presenting to people they know and who they think are really important. That means a lot.”

Educators like Kayla and Sarah show that education is not just learning about science, but about how to be kind, how to take turns and how to try new and perhaps challenging activities in a safe, comforting environment.