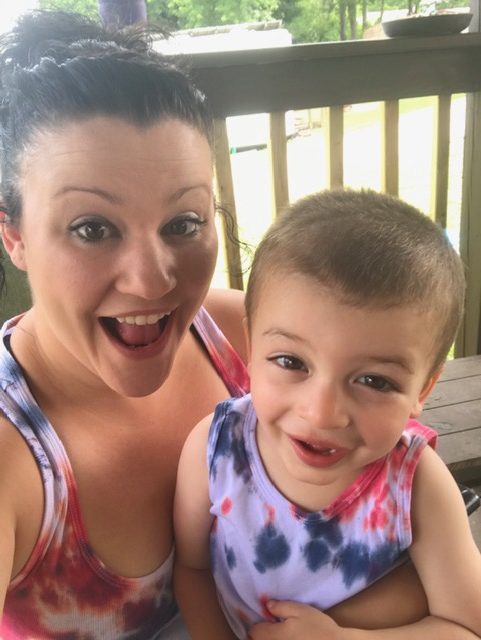 When Edward Walter Alexander, V, was three months old, his mother, Amy Brown, grew concerned that he wasn’t using his right arm. A visit to the pediatrician led to a trip to a neurologist and, a few weeks later, admittance to a children’s hospital after “Walt” began to have seizures. Neurologists determined he’d had a stroke, which had likely occurred in utero. After a week in the hospital, Amy brought Walt home with a recommendation from his pediatrician to contact Grafton’s Infant and Toddler Connection (ITC-SV) of the Shenandoah Valley.

Gena Zydelis, Intake Service Coordinator, met with the family in their home to gather information used to evaluate Walt’s eligibility for the program. The next step was conducting a multi-disciplinary assessment focused on functional skills. Once this was completed, an Individual Family Service Plan was then created. Finally, the level of support and services for Walt was determined.

The ITC –SV care team, which includes Jennifer Mantz, an occupational therapist, and Kate Hartsook, a physical therapist, then began working with Walt in the comfort of his own home. They started with the basics: tummy time, rolling, and sitting. Now, two years later, Amy says, “They’ve taught me everything — how to help Walt walk up the stairs, how to encourage him to use his right arm, and they’ve made sure I’m comfortable doing it after they leave our home.”

Parent education is a primary focus of the care team, who take a lot of effort to support the parents of their young clients. After all, it is the parents, who are with their children every day.

“I’ve been doing this for 20 years,” says Jennifer, “and the biggest difference in a child’s progress comes from the interaction and engagement they receive from family, teaching them strategies, coaching them through activities they can do throughout their day. It makes a huge difference.”

Another difference comes from home visiting itself, which is different than a medical model. It is designed to promote learning and functional skill development during daily routines in a child’s natural environment.

“In a clinical setting you have equipment at your fingertips,” explains Kate. “In a home, you use what they have and incorporate it into the home visit. It allows you to tap into the interests of the child in their natural environment, use their toys, set it up in a way that’s conducive to progressing their mobility or whatever the goal is.”

“You become part of the family,” says Jennifer. “They become very important to you.”

“These women have hearts of gold, and they treat me like I’m their family. They care for me as well as for Walt. In the beginning, when I had worse days than better, they listened to me, comforted me, took the time to let me know I wasn’t the only person in the world going through this. That’s great, because a lot of people don’t recognize what the parents go through.”

As for Walt, he continues to progress through his milestones and to be “a delight,” “a problem solver,” and “the hardest working little boy ever,” according to Kate and Jennifer, both of whom credit his success to Amy’s proactive efforts.

“It’s really exciting to be there when they meet a milestone, when they roll over for the first time or sit on their own,” says Kate. “Seeing parents and babies glow is one of the things I look forward to. We’ve had a lot of those moments with Walt, and he’s going to have a lot more once he’s out of our program, because he’s just a really awesome kid.”

Plans for Walt’s preschool program are already in the works as he approaches age three and transitions out of ITC-SV’s Early Intervention Program.[1]

“The care team help guide you through everything,” says Amy. “I think it’s important for families who are thinking about using this program to know how great they actually are and how much they care about your child and you.”

[1] Any child up to age 3 is eligible for early intervention services if they exhibit one of three criteria pertaining to development, and no child who meets the criteria is denied services due to an inability to pay.