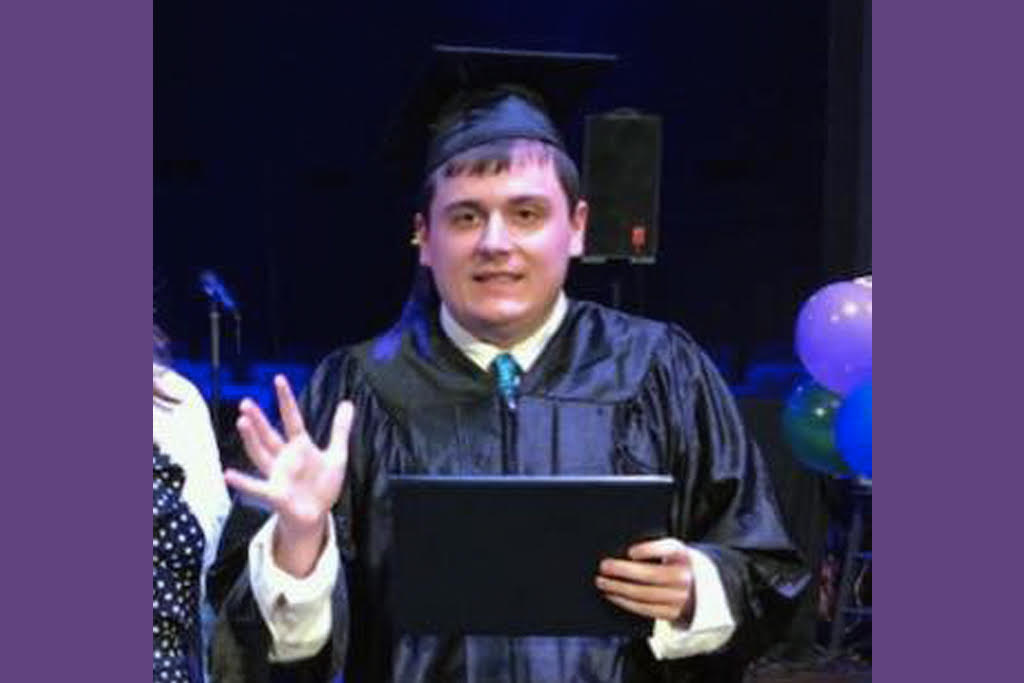 The Beginning of an Incredible Journey

Making the decision to place her son at Grafton was one of the hardest that Mary Anne has had to make as a parent. Kevin, a now 22-year-old young man with Autism, struggled in the public school system. At one point, he told his parents that he did not feel safe in his academic environment. His behaviors at home became increasingly challenging for his family to manage. Still, having her son live away from home was a concept with which Mary Anne struggled.

“What I thought were the shortcomings (about the situation) ended up being the successes,” she now says.

When Kevin first came to Grafton in May 2015, his previous academic placements had left him with some trauma. He was on high levels of medication and was very sensitive to changes in his routine. The Grafton team used behavioral interventions, such as working with a timer to help Kevin transition from a less preferred task to one that he preferred more, to help address these challenges.

By December of 2015, Kevin had already made astonishing progress toward reaching the goals set for his referral behaviors. After only a few months at Grafton, he turned to one of the staff in his residence and declared, “I am safe here!”

When some of the behaviors surfaced again, the team focused on the reasons behind this, helping Kevin to identify the emotions that he was experiencing. Over time, Kevin was increasingly able to not only identify his emotions, but also to verbalize things like “I am happy. I am sad” and work with the team to manage those feelings without incident.

“Kevin is a hugely changed person from when he first came to Grafton,” says his case manager, Teri Kimball. “In his last six months here, his ability to use and identify his coping skills was 100%. This is amazing for a kid had previously had multiple academic placements.”

Kevin made so much progress that his medication was cut nearly in half; he came off the strongest medication entirely. As a result, he lost 45 pounds.

“That may also have to do with the fact that Mr. Bryan (Kevin’s group home manager) doesn’t believe in processed food,” jokes Mary Anne.

While Kevin was at Grafton, his number of incidents went from as many as 10 a day to just one over the course of two years. His mom says of the Grafton team, “Their approach was one of dignity and value. Kevin was never restrained and never secluded. The way he behaved with the staff, he was respected and the respect went both ways.”

The admiration goes both ways, as well.

“Kevin’s family works very hard to make him a part of everything they do. They provide opportunities and experiences that are tailored to him and get him home as much as possible,” says Teri Kimbell. “Mary Anne also worked closely with the group home to make sure there were things that he could be a part of. She is such a champion in ensuring his needs are met.”

This close relationship with the individuals caring for Kevin made the day of his graduation this past June even more special.

“Kevin is the second of six children; I’ve done other graduations,” said Mary Anne. “This was the most intimate event I’ve ever been to because of the intensity of the emotion.”

The event also provided an opportunity for Mary Anne to meet other parents – to share the stories and successes of their children. Each student was given a diploma by their case manager, the individual responsible for their academic and educational life during their time at Grafton. As Mary Anne explains, “His case manager supported Kevin’s human growth – more than anything it’s that.”

As is customary, anyone who wanted to talk at the graduation was invited to do so. As Mary Anne spoke, Kevin joined her on stage. She told her son, “When you came to Grafton, we thought it was the end of everything. But it was actually the beginning of an incredible journey. And I will always be grateful to Grafton for what it has done. I am so proud of you Kevin, for everything you have accomplished.”

Though there were many people speaking and the ceremony went on for quite some time, it seemed too short to Mary Anne. “When it was over, it was over. It was the end of a relationship and I didn’t want the relationship with Grafton to end,” she said.

In speaking to Principal Allyson Davis and Grafton COO, Scott Zeiter, Mary Anne said, “I will never forget how grateful I am for Grafton. I am so grateful for its support and for creating a home for Kevin for the past three years.”