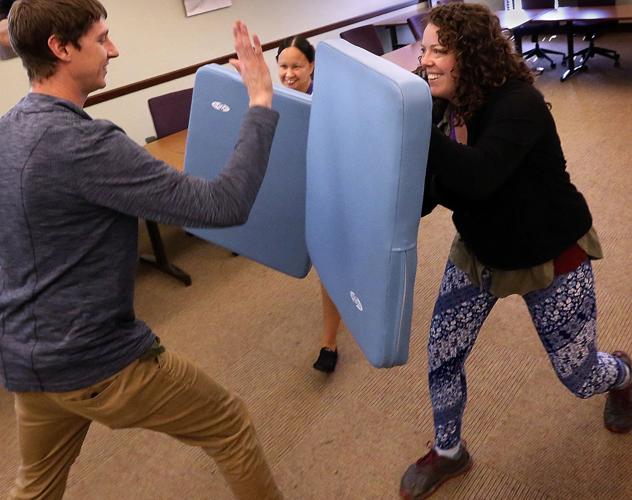 Ukeru technique provides a harbor in the tempest

*This article originally appeared in the Winchester Star.

People with cognitive impairments such as autism or a brain injury sometimes become overwhelmed by noise, lights, activities and changes in routine. When they can’t properly process the stimuli, it can lead to violent outbursts.

For decades, the only method to protect out-of-control individuals and those around them was to restrain them or put them in isolation until they calmed down.

Ukeru changed that. The behavioral modification technique developed by Grafton Integrated Health Network of Winchester makes it possible to safely calm someone in crisis without ever laying a hand on them.

Dori Sanders, marketing ambassador for Ukeru, said the approach was created after Grafton — whose day programs and residential facilities serve thousands of children and adults with behavioral challenges — realized it was using restraint and isolation too frequently when dealing with unruly clients at its schools and group homes in Winchester, Berryville and Richmond.

“Not only were clients and students getting injured, staff was also getting injured,” Sanders said. “We had high [employee] turnover rates, we lost our workers’ compensation insurance — we were at an all-time low.”

In 2005, Grafton issued a mandate that physical restraints and seclusion be completely eliminated. Teachers, specialists and administrators worked cooperatively to develop a new technique they called Ukeru — Japanese for “to receive” — which is a hands-off approach to crisis management that emphasizes comfort rather than control.

Ukeru uses calming, reassuring words and body language to de-escalate a crisis. If a person in distress becomes violent, pads are utilized to protect staff and the client but no one lays a hand on the individual having an outburst.

“We’re not ever going toward a client. When they’re aggressing or in crisis, we step away,” Sanders said. “We don’t want to put anything on them — no force, no additional aggression.”

The support, understanding and guidance provided by staff allows the individual to calm down much more quickly than they would while physically restrained or confined to a barren room.

Since developing the Ukeru method, Grafton has reduced the use of physical restraints by 99% and seclusion has not been used for a decade.

By 2015, the new behavioral modification technique had become so successful that Grafton established Ukeru Systems as a for-profit business to market and sell the patented, trademarked approach. The company currently serves more than 400 organizations in the United States and Canada, including schools, psychiatric and behavioral health facilities, assisted-living communities and foster-care agencies.

“It’s for anyone and everyone,” Sanders said about the Ukeru technique. “Doesn’t matter if it’s the smallest kid or the largest adult.”